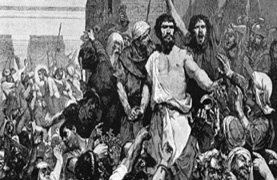 What Happens When Grace Happens: Forgiveness

You know what happens when grace happens? When grace happens you were sitting on death row, you knew your fate and for the first time you let your denial and pride go and actually understood the gravity of everything awaiting you. As you circled your cell waiting for the guard to come and read you your last rights, the only thing you could hear was your heart pounding while you waited for your last breaths. Then all of the sudden the guard shows up and your head drops, and then he says….”your free, they want Jesus instead.” This is what happened to Barabbas, a murderous vile individual waiting crucifixion, and deserving of what would be his demise. The one pardons him is the only one who was without fault, Jesus. We don’t know what Barabbas does after this day, if he changes or if he continues in his treachery, but we can determine what we do with our Barabbas moments from here on, after our pardon. Join us Sunday at 10am to find out what happens when grace happens.

Luke 23:13-16, 18-20 Then Pilate called together the leading priests and other religious leaders, along with the people, and he announced his verdict. “You brought this man to me, accusing him of leading a revolt. I have examined him thoroughly on this point in your presence and find him innocent. Herod came to the same conclusion and sent him back to us. Nothing this man has done calls for the death penalty. So I will have him flogged, and then I will release him.” Then a mighty roar rose from the crowd, and with one voice they shouted, “Kill him, and release Barabbas to us!” Barabbas was in prison for taking part in an insurrection in Jerusalem against the government, and for murder. Pilate argued with them, because he wanted to release Jesus.